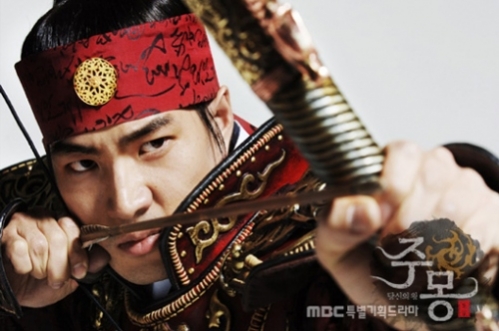 Well, after 81 episodes, 6 months, and oodles of melodrama Jumong is finally done

!  (This drama originally aired in Korea in 2006.) I have been borrowing this from the local library and had to wait between discs a lot, sometimes even forgetting what was going on in the show.  As one of the most watched and most loved shows in Korea I had to watch it.  I’m glad I did too, even  if I fell asleep a lot and fast forwarded quite a bit.  Haha…  I didn’t know what I was in for when I first started.  I only knew that it was a historical drama and was very popular.  I didn’t even know how LONG it was!  Aigoo!  It’s actually a relief to be done.  It’s a challenge to really summarize this series – so I’ll make it pretty brief. (SPOILER ALERT.  Of course, if you don’t plan to watch this, or you have any knowledge of Korean history it probably doesn’t matter.)

The story starts off following Haemosu, the leader of a rebellion army that is set to reclaim land and people pushed aside by the Han (Chinese.)  Haemosu is friends with Keumwa the prince of the local kingdom, Puyo.  Together they fight for the people.  After losing a battle to underhanded means Haemosu is caught and eventually believed dead, leaving behind his (not-yet/never to be) wife who is pregnant with his child.  As a result, Keumwa takes her as a concubine when he is crowned king of Puyo and cares for in Haemosus’ stead. After years pass and Jumong grows up (as a rather pathetic and lazy youth) along his “ha

lf” brothers (Unknown to most they aren’t even related.) After a trip into the outer world Jumong grows and learns that there is more to life than boozing and womanizing.  While away for the first time Jumong meets Sosuhno and eventually falls in love with the strong-willed merchants’ daughter.  Jumong starts to try and live up to his potential and becomes  a common target for pretty much everyone.  After lots of drama and different situations Jumong is forced to hide in a local jail where he meets his future master.  A blind man that no one seems to know anything about.  They escape the jail together after a fasion and Jumong learns martial arts from him, becoming a great force to be reckoned with after learning all of Haemosus’ techniques.  Jumong returns to the castle and after a short while finds out that his late master was his father, only to be too late to meet him – Haemosu has been killed for his previous deeds by Jumongs brothers.  This creates a rift between the family that Jumong grew up with that will never heal.  Sosuhno becomes the object of Prince Daeso and Jumong at the same time and when Daeso becomes the acting King while Geumwa is recovering from a war injury Daeso tries to force her into marriage.  Daeso goes out of town, and Sosuhno marries her bodyguard and mentor – Wootae out of fear that she will be forced to marry Daeso against her will.  While the king is sick, Jumong is forced to follow the orders of his brother Daeso and eventually is pressured into marrying Yesoya, a woman who saved his life that he feels indebted to.  Jumongs’ discontent with how things are run in Puyo and the way they treat the migrants of the old country cause him to finally leave Puyo in search of his own path, leaving his wife behind with his mother in order to protect them, promising to return when he’s built a better nation.

After a few years Jumong re-creates the Damul army alongside long-time friends and sworn blood-brothers Oi, Hyopbo & Mari.  Together they band together an impressive group of fighters and even the best iron-smith in the land – Mopalmo.  (Aigoo, I’m already tired of this summary…I’ve written this far and left out SO much…)  Eventually, Sosuhno comes back into the picture having faced her own trials with a very similar goal to Jumong – create a nation and unite her people.  Out of necessity and mutual interest, Jumong and Sosunho join together.  Ultimately creating the nation of Koguryeo.  A shift in power in Puyo puts Jumongs mother, wife and child in danger and they are forced to flee.  Yesoya and Yuri escape to an unknown fate, while Yuhwa is caught and brought back to king Keumwa.  After 15 years of being separated Jumong is re-united with his son Yuri and his first wife, Yesoya only when she is dying and Yuri is filled with anger that such a great man is his father but he was abandoned to live a life of danger and suffering.  Yuri is caught up in a power struggle when he first arrives in Koguryeo leading to a shift in power for the empire.  Jumong continues to lead his people to prosperity and eventually, Yuri succeeds him.

::sigh:: That, my friends, is just a tiny portion of what really happens in Jumong.  I fast-forwarded mostly any scenes that were extended recall/replay scenes.  You know what I’m talking about.  For about 30 seconds our characters stare off into space looking thoughtful and shoot back to a scene either from 5 minutes ago (ANNOYING!) or several episodes before (almost as annoying!)  Jumong is a great series nonetheless and is pretty usefull in getting to know about Korean history.  I’m sure tons of it is dramatized and made up, but they try to stick to facts as often as possible.  The acting is amazing, as always the Koreans can cry at the drop at a hat.  Song Il-Kook had quite the roll to portay in Jumong and I think he did it very well.  Changing from immature “teenager”,to battle hungry and spirited young man then into the stoic and powerful leader of a new nation was a challenge that he took on with great success.  Han Hye-Jin was beautiful, powerful and at times vulnerable in this role and it seems funny to me that she can also play characters like Geum-Soon in Be Strong Geum-Soon.  Bae Su-Bin was probably my favorite secondary character as Sayong.  The not-quite-a-man and yet obviously not a woman that stays by Sosuhnos’ side the entire series.  His interactions with Hyopbo always made me smile.  It’s hard to say that I would recommend this to any one, because it’s such a highly specific genre of show, but if you’re in fo a historic drama or are really into Korea like I am, then you have to see this series.  (Probably more than half of Korea did – so you should too!)  I kind of feel bad for Lee Jae-Sook.  He is the actor that played Prince Piryu, who has a big role in the last few episodes but is SUPER hard to find information for online.  He looks familiar so I was trying to find where I had seen him before and couldn’t even find HIS real name until I did some real digging.  “Ne Inoom!” LOL.